In 2017, Federal Equipment Company learned that a modern pharmaceutical manufacturing campus located in Huntsville, Alabama, was on the real estate market after its owner, Par Pharmaceuticals, an Endo International company, shut down operations. While our team has purchased entire facilities in the past, liquidated the equipment, and sold the facilities to other entities, we had never taken on a project of this magnitude.

The massive Huntsville campus is situated on over 110 acres of land, with three buildings each exceeding 300,000 ft2. The campus is still relatively new, having been built in 2001, and has since been upgraded with modern equipment. It is a state-of-the-art cross-dock facility, with plenty of room for expansion, and it is ideal for manufacturing, production, assembly, and distribution. However, regardless of the attractive attributes of the campus, which also included a skilled workforce; close proximity to the airport, expressway, and downtown Huntsville; and a thriving metropolitan area, the fact remains that it is highly difficult for a pharmaceutical company to purchase a manufacturing site without a product line included in the deal, which we were not going to be able to provide to potential buyers after Par Pharmaceuticals shut down operations. The high degree of risk and uncertainty was balanced by the incredible opportunity that such a world-class facility, people, and community had to offer, and we made the daring decision to accept the challenge of crafting a strategy to buy and sell this massive pharmaceutical manufacturing complex.

We had conducted a lot of business with Qualitest Pharmaceuticals, the previous owner of the Huntsville facility, before they were acquired by Par Pharmaceuticals, and we had great relationships with many of the site stakeholders but did not have the same level of connection at the executive level. We had also been slowly purchasing equipment for resale as Par was shutting down process lines, and over the years we were able to get a firsthand glimpse into all of the wonderful attributes that the site had to offer. What began as an endeavor based on liquidating equipment suddenly became the opportunity of a lifetime.

The campus boasts three buildings, each designed for large-scale pharmaceutical manufacturing. The first building of the facility was used to produce tablets and capsules, with over one billion units produced each year, and high-speed, serialized packaging lines had just been installed. The second building was utilized for the production of liquids, creams, and ointments, with serialized packaging lines and two state-of-the-art laboratories. The third building had been used as a distribution center and contained a host of corporate offices.

While the opportunity to purchase and sell this campus was tantalizing, it came with many risks. Although taking on a project of this magnitude seemed outlandish, with the support of Federal Equipment Company Chairman, Michael Kadis, the company began to seriously consider the potential. Initially, we garnered the interest of a few interested clients who would potentially buy the site if we were to acquire it, but the discussions didn’t materialize. Undeterred, we continued to press on and evaluate our options. What partially fueled our passion to acquire this site went far beyond the simple acquisition and sale of property — it was about the people. With the shutdown of the site, over 1,400 talented people were now out of work, many of whom we had dealings and relationships with over the years. We understood how much it would mean to them, Par, and the city of Huntsville, if we could successfully pull this off, as any interested contract development and manufacturing organization (CDMO) could leverage the local talent pool to get operations off the ground and begin to scale. 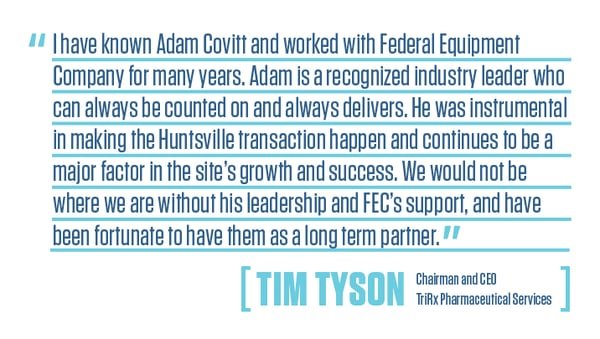 Due to the size and scope of the project and the stalled negotiations, we realized we would need to collaborate with some first-rate partners with specific expertise in key areas to be able to bring this project successfully to fruition. We put together a strong team of partners, including Capital Recovery Group, an international private equity firm with expertise in complex industrial facilities with idle or marginally productive assets; Heritage Global Partners, one of the world’s largest industrial auction companies; and PPL Group, who specialize in creative and agile liquidity solutions for companies with distress or special situations through the purchase and sale of commercial and industrial assets, real estate, and entire facilities, with ownership ranging from sole proprietors to Fortune 500 companies. With a strong, concerted effort, we purchased the Huntsville site in its entirety in December 2018.

We realized that we would likely need to take a phased approach, focusing on the three individual buildings rather than the sale of the entire site. At the time, the OSD building, which was used for the production of tablets and capsules, was over capacity and not an option for CDMOs in the United States. Ultimately, we decided that the most prudent course of action was to sell the equipment in the first phase and focus on the actual building later. We held an auction and were able to sell the equipment to a variety of CDMOs—following this, we were able to clear the building and begin plans for remodeling and redevelopment of the space to accommodate interested buyers or tenants. We are in the process of demolishing the interior and white-boxing it for interested entities to be able to easily customize and imagine their operations in the space. This gorgeous, self-contained building boasts its own systems, DEA cages, offices, two laboratories and optimal shipping capabilities. This 323,486-ft2 building remains vacant today and is available for lease or sale. 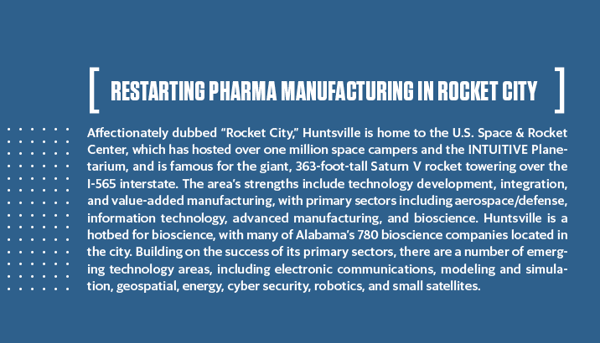 The Birth of TriRx Pharmaceuticals

The second building was designed as a liquids, creams, and ointments production facility, but like the tablet and capsules building, it lacked the capacity to interest most U.S. CDMOs. However, rather than liquidating all of the equipment, we reached out to Tim Tyson, a world-renowned pharmaceutical industry leader with whom we had a long history.  In his career, Tim has negotiated complex multibillion-dollar mergers and acquisitions, led major turnarounds that have fueled growth and value, and been instrumental in bringing more than 50 lifesaving and life-improving medicines to market. He had just left his previous company, and our previous interactions afforded us a great deal of mutual respect and trust, so when we told him about the site, he was intrigued, albeit with understandable caution.

As Tim noted, “The first key point to a successful CDMO is to have world-class facilities, with world-class capability, with world-class people that understand on-time delivery and regulatory compliance.” Tim believed that Huntsville met the criteria, with its world-class facilities, long history of performance, and recognition of being a world-class supplier. However, Tim recognized the risk in acquiring a manufacturing operation without the immediate revenue to cover the operating expenses, which takes an average of 18–24 months.  However, as he further noted, “the second key point to a successful CDMO is trust.” Owing to his history working closely with myself and Federal Equipment Company, Tim was convinced that it was a worthwhile risk that could pay dividends in the near-term due to the excellent facilities and the existing relationships.

Given this opportunity, Tim founded TriRx Pharmaceutical Services, a global CDMO that operates out of the facility, where he operates as CEO and Chairman. TriRx was able to reemploy over 250 former employees from the Par site, including the former director of engineering, Tom Woods, and the former director of technology, Kevin Rupe, who were both instrumental in the transition. TriRx just celebrated its one-year anniversary, and the city of Huntsville is very happy to have them as a part of their community.

The Present and Future of Federal Equipment Company

The third building on the Huntsville campus, which was previously utilized as a distribution center, with a state-of-the-art warehouse and corporate offices, was leased to a Fortune 500 defense contractor. Huntsville is a hot market for defense, automotive, and technology, and getting a long-term tenant in the building aligned perfectly with the overall vibe of such an industrious town.

The Huntsville campus is four to five times larger than any other project we’ve taken on previously. To see a site like this come back and thrive has, unfortunately, become a rarity in the industry.

Federal continues to evolve, and we are continuing to take on larger-scale projects because most of the time, there is no single solution. We have to be flexible, as not every auction is going to go well, and we need to be able to offer solutions that help companies divest from their buildings and/or process lines.

This is our path forward. We receive countless calls from API manufacturers, sterile manufacturers, and many CDMOs that are looking for sites in the United States. We are looking for other U.S. sites that will satisfy our clients’ manufacturing facility needs, and the U.S. government has programs available to help businesses who want to manufacture domestically. Given the drastic changes that have rocked the world in 2020, particularly the shift in how business is done coupled with a renewed interest in a domestic manufacturing model, we are poised for growth. As with the TriRx opportunity, we are confident that in the near term, we will find a suitable buyer or tenant for this one-of-a-kind building. 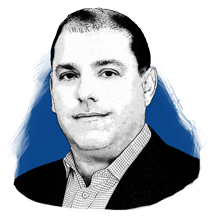 Adam has over 19 years of experience in the pharmaceutical and chemical process and packaging industry, with a focus on investment recovery and the purchase and sale of high-end equipment to major pharmaceutical sites and contract manufacturers with a global footprint. Mr. Covitt earned a bachelor’s degree from Ohio University in Athens, Ohio.